For many candidates, interviews are a high-pressure situation.  In this environment they will accidentally say the wrong things, forget to say things that they should have mentioned, or unintentionally convey the wrong message through their body language.

As an interviewer, your role is to steer the conversation and address anything that seems “off”, giving the candidate an opportunity to either clarify, explain, or correct their behavior. Implementing the below tips will ensure that whether the interview gets back on track or not, you have a clear and definitive understanding of the candidate and their capabilities.

A successful interviewer knows how to watch for red flags during the interview. For instance, if a flag relates to a resume or the responses a candidate gives, try asking probing questions to explain the incongruity. For example, “I’m concerned because your resume shows experience with software ABC, but your answers do not show much knowledge about it.” Or, if a candidate makes comments about manager disputes or negatively speaks about a former employer, dig deeper to find out more information. “You listed on your resume that you left for personal reasons. Did you quit with two weeks’ notice or were you released by the company?”

Interviewers should not be hesitant to evaluate candidates’ character traits. For instance, if a candidate is late, rude or displays spelling or grammatical errors on their resume, give them a chance to explain their actions. Candidates who provide excuses rather than take responsibility for their actions typically treat their job the same way. However, if a personality trait such as lack of eye contact seems to be an issue, try asking questions to uncover reasons behind it. Perhaps the candidate has a disability that causes them to act differently than other professionals. As long as they can perform the job duties, they may remain in the running.

A key component of a successful interview is keeping the candidate focused. If a candidate becomes too comfortable and begins discussing personal issues rather than the job, ask them to briefly elaborate and then steer them back on track. For instance, if the candidate admits to having a felony or misdemeanor, you should dig for more information while remaining within legal limits. Or, if the candidate shares that they recently had a death in the family, respond with compassion and suggest rescheduling the interview.

When evaluating a candidate, pay attention to a candidate’s core values first, skills and experience second. If a candidate fits with company culture, they are more likely to succeed in a role than one who does not. Loyalty, respect, quality of work and integrity are more important than technical skills.  Skills can always be taught;core values cannot.

Marco & Associates is a leading Chicagoland accounting and finance executive search and interim contract placement firm. Our recruiters help you meet business goals by taking a consultative approach and providing qualified candidates. Get in touch with us today. 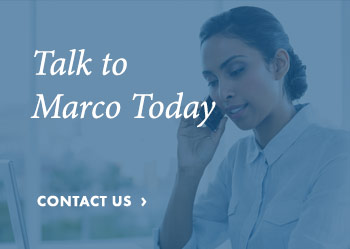